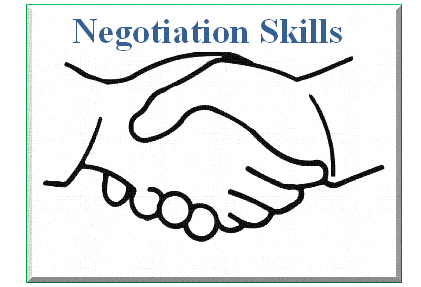 Three women were involved in a serious discussion over a million-dollar question. The critical issue was ‘if’ and ‘why’ they had to pay leave salary for the housekeeper. The issue came up because the housekeeper had clearly informed that she would stop working if leave salary will not be paid. It did not matter to her whether you are going on a month’s vacation or for two months. You need to pay her all through. If you are wondering what ‘leave salary’ to a housekeeper means, it is paying her the full salary when you go for vacation. Yes, you guessed it right! It is similar to corporate practice. After a series of discussion, they reached a consensus that was agreeable to the woman under discussion and to all three women who employed her. Therefore, they solved the issue amicably.

If you can say that you have a peaceful life, be it in your family, school or at work, it is because you are successfully negotiating most of the time. It is as simple as that. Negotiation is a process of sorting out differences or conflicts between two or more parties, such that they solve the issue in a way that is mutually beneficial to those involved.  Perhaps, it involves a lot of ‘give’ and a little of ‘take’.

We face numerous situations every day that might end up in conflicts if we are not careful. To state it differently, if we do not ‘negotiate’, we would end up stacking unresolved conflicts. Negotiation is required to solve everyday conflicts, whether it is as simple as the example of the leave salary or something else that is more complicated. From children playing cricket and fighting over who goes batting first to a more serious business issue, we negotiate in order to be happy at both ends. What's more, if you need to be successful in negotiating, you need to be skilled at it. Success does not come very easily.

You need to have the following to negotiate successfully; that is in a way that is satisfactory to both the parties.

Did you find the post useful? Please leave your suggestions in the box below.